With Postgres 13 released recently, a new season of testing has begun! I recently wrote about the impact of BTree index deduplication, finding that improvement is a serious win. This post continues looking at Postgres 13 by examining performance through a few steps of an OpenStreetMap data (PostGIS) workflow.

Performance appears to be a strong advantage to Postgres 13 over Postgres 12. Marc Linster wrote there's "not one headline-grabbing feature, but rather a wide variety of improvements along with updates to previously released features." I am finding that to be an appropriate description. At this point I intend to upgrade our servers for the improved performance, plus a few other cool benefits.

I am already using Postgres 13 for some dev servers. One of the features I helped review is very helpful when working through development. Before Postgres 13, dropping a database when a connection exists used to cause an error that was easiest to fix by restarting the Postgres service.

Now with Postgres 13 we can use the FORCE option, no more pesky errors.

This post used the latest minor versions of Postgres available at the time of writing.

This post used a single Digital Ocean droplet with 4 CPU and 8 GB RAM ("Rig B" from Scaling osm2pgsql: Process and costs). The Colorado region is loaded from Geofabrik using this process, and takes up about 1.3 GB in Postgres when processed through PgOSM. Each version of Postgres was installed on a single machine with only the Postgres version being tested running during the tests. Timings provided are the average of at least three runs.

My notes for this post started when Postgres 13 Beta 2 was available. Overlapping test results from Beta 2, Beta 3, and 13.0 confirm the overall trends documented here.

The first step of loading OpenStreetMap data is to load it through osm2pgsql. The majority of the work done by osm2pgsql is unpacking the compressed osm.pbf file and pushing it into the database. Since so much of the processing in this step is happening outside of Postgres, the potential gains here by simply upgrading Postgres are limited. Postgres 13 was still a small margin (3%) faster than Postgres 11 (121 seconds vs. 125 seconds) when using osm2pgsql to load Colorado to PostGIS. 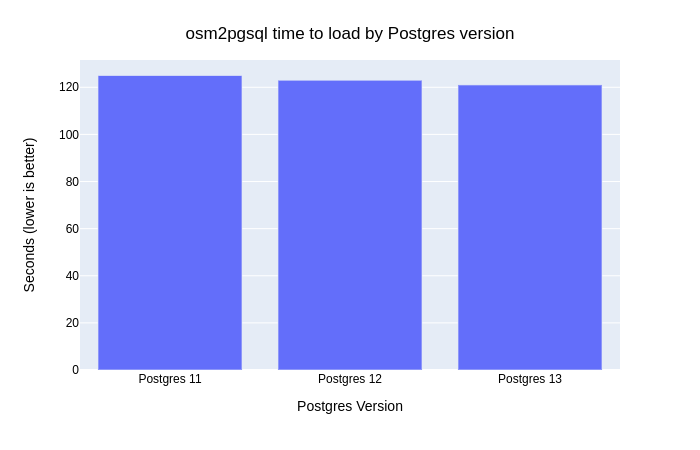 The second step is to prepare the structure of OpenStreetMap data by running it through PgOSM. All but a tiny amount of processing happens within Postgres/PostGIS on this step. The transformations use a series of SQL statements consisting of CREATE TABLE <foo> AS SELECT ... WHERE <bar>, followed by the creation of a GIST index on each table. This step is where Postgres improvements can have an larger impact. Postgres 13 was 18% faster than Postgres 11 and 12% faster than Postgres 12! 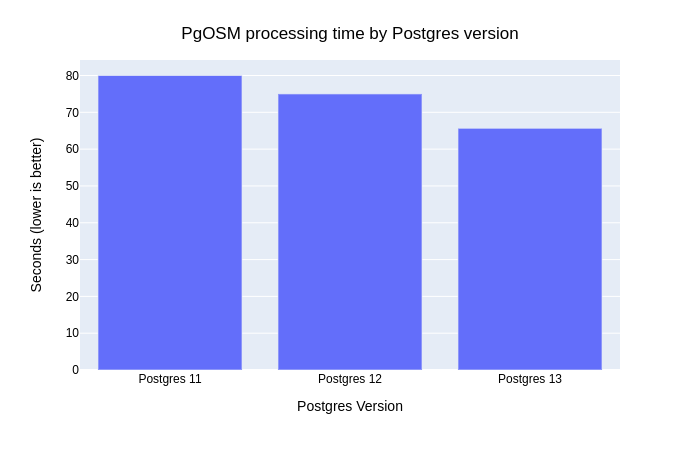 The net effect on the ETL time (osm2pgsql and PgOSM) is 9% faster when using Postgres 13!

Our pgbench-tests repo has a couple test queries that use Colorado's OpenStreetMap PostGIS data. For this post I'll reuse tests/openstreetmap/pgosm--co-jeffco-trees-benches.sql. That test query was used when putting Postgres 12 on the Raspbery Pi 4 to the test, and was examined in our recorded session PostGIS Queries and Performance (4/6).

While proper benchmarking should run considerably longer than 10 minutes, this level of testing provides sufficient data for the purpose of this post.

My last post covering the BTree index deduplication in Postgres 13 showed significant savings in the size of btree indexes. It also showed the change has the most significant impact when created indexes on columns with duplication. To look closer at this we look at the columns available in osm.building_polygon made available from PgOSM.

A query in the pg_catalog.pg_stats table shows a few columns that each have a handful of distinct values. The building column is often used for filtering and n_distinct=65 indicates it's a good candidate to take advantage of the btree deduplication.

Note: n_distinct is estimated! Your results will likely vary a small amount from the values shown here! Running ANALYZE will often produce different estimates even when the data has not changed. 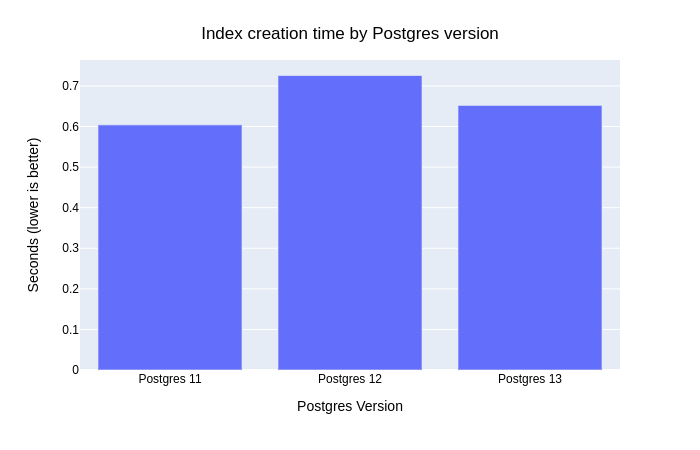 With the index created we can query the index size.

Looking closely at the planning and execution times shows Postgres 13 was only marginally faster. The row counts and index sizes in this case are small enough that the reduction in size does not provide a major impact on overall performance. Reducing the number of blocks Postgres needs to process will provide all sorts of boosts to performance, a little here, a little there. As indexes scale into the range of GB (instead of low MB) the reduction in index size is likely to have a significant positive impact on performance. This will be especially true as index size reaches and exceeds available RAM.

Postgres 13 is another solid release in a long line of reliable software. In each case I've tested so far it performs better than Postgres 12. I haven't scheduled the upgrade of our production servers yet, though at this point it is only a matter of time!

Thank you to everyone who had a hand -- big or small -- in helping Postgres 13 become yet another great version of our favorite database!