Happy Pi (π) Day! I decided to celebrate with another post looking at the Raspberry Pi 4's performance running Postgres and PostGIS. A few months ago I added another Raspberry Pi to my collection, the new Model 4 with 4 GB RAM. My initial review focused on pgbench results comparing the Pi 4 against the previous 3B models as well as the even lower-powered Raspberry Pi Zero W. This post continues testing the Rasperry Pi 4's performance with PostgreSQL and PostGIS, this time with a look at a more suitable setup for production use cases. The main difference are the use of an external SSD drive and full-disk encryption. 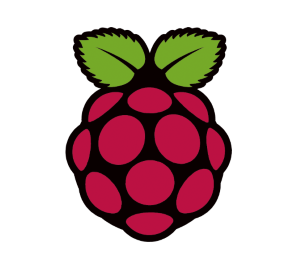 The Raspberry Pi 4 is mounted in an enclosed Cana Kit case with a small fan in the top running on the 3.3 V rail (lower power), powered by a dedicated 3.5A power supply.

The internal SD card is a 32 GB A1 rated SD card. With the Pi 4 you need the fan (see Baked Pi) and the application-class SD card to reach and maintain the best performance. This core setup from CanaKit costs around $100 at the time of writing. The SSD drive used is a SanDisk 500GB Extreme Portable SSD ($90) that can take advantage of the Pi's two (2) newly available USB 3 ports. That SSD claims 550 MB/s so so should be faster than what the Pi can handle, this benchmark showed 363 MB/s read, 323 Mb/s write was possible by the Pi.

The latest versions of Postgres (12.2) and PostGIS (3.0.1) were installed from source on Rasbian Buster Lite, read this post for an overview of that process. The data directory for our Postgres instance is created on the SSD instead of the Pi's internal SD card. This can be defined during the initdb and startup steps, or moved later via postgresql.conf.

My end goal for this Pi 4 is to use it as one of my local development PostGIS servers. The configuration changes I make in postgresql.conf are with that goal in mind. I'm leaving max_parallel_workers_per_gather=2 (per results here), disabling Just-in-Time (see Postgres: JIT), and bumping up memory values for shared_buffers and work_mem. I always use TLS to encrypt connections and am using the new ssl_min_protocol_version to limit protocols.

Now that it is realistic to setup a Pi with external storage, said external storage can (and should!) be encrypted. The SSD I am using is setup with full disk encryption (FDE) using LUKS. This can be accomplished quite easily. Encryption is great for security though it does come at a cost. This benchmark showed FDE has a 20% hit on disk performance. I figured this was worth mentioning since this is a post about performance, after all.

The first place I test performance is typically with bulk data loads via osm2pgsql. I wrote about this with the Raspberry Pi 3B last year, and found that Colorado loaded in about 2 hours and 45 minutes. The Raspberry Pi 4 can do the same on with the SSD in 7.9 minutes, 95% faster! An additional detail to note is the file size of the Geofabrik export for Colorado has grown by 14%, from 167 MB to 191 MB over the past 14 months. 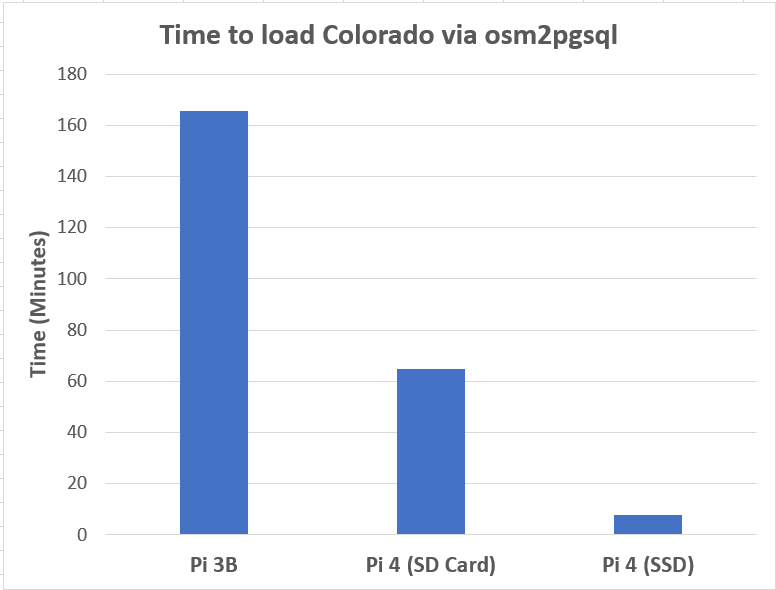 See my recorded session loading to PostGIS with osm2pgsql, or read the updated blog post to learn more about the osm2pgsql process.

The built-in pgbench tests show one perspective, though it isn't all that similar to many common workloads. A custom pgbench test can help show a more realistic perspective for your workload. Read this post for more details, I use the same process outlined in that post.

The initial wide open reporting test was ran for 10 minutes to get a baseline for these queries. This showed an all-out rate of nearly 16 TPS for the three reporting queries. On the Pi 3B this test topped out at roughly 6 TPS; the Pi 4 with full disk encryption on an external SSD provides a 167% improvement. Another win!

I will also revisit the throttled rate test I did in the prior post. The goal with this approach is to determine the threshold of where performance, a measurable quality metric, breaks down. With the Pi 3B, the following command was enough to cause noticable numbers of late (2.6%) and skipped (0.5%) queries.

I pushed this test with --latency-limit fixed at 500ms up through 12 clients/TPS. The Pi 4 handles this increased level of activity far better than the Pi 3B handled 1 TPS. Even at 12 TPS there were zero skipped queries and 17% of queries were "slow."

The above tests outperformed the benchmark set by the Pi 3B. With the improved query performance on the Pi 4, I decided to increase quality expectations (--latency-limit) from 500 ms to 250 ms. The following table shows the results for latency, standard deviation, % late and % skipped. Results are included for a target Client/TPS count of 3 through 16.

A while back I added a couple scripts under an OpenStreetMap folder in my tests repo. The first uses the data from the table structure created by osm2pgsql. In this original form, the 250ms quality is too high of a bar. The average query latency comes in at 578ms and 15% of the transactions were skipped.

In my talk PostGIS Queries and Performance I cover the importance of the data structure and its impact on performance. The second query in the tests/openstreetmap folder runs an equivalent query that returns the same results, but uses the structure created by PgOSM. The results using the restructured data are more impressive and well within the quality expectations.

This post has reviewed the Raspberry Pi 4's performance and ability to handle my Postgres and PostGIS workloads. I'm impressed at the improvements in numbers that I am seeing from pgbench. I'll give it a try to see how it handles my regular local use cases including exploring with QGIS. Stay tuned!