Routing with Lines through Polygons

One of my favorite layers to route with pgRouting is the water layer. I am interested in where water comes from, where it goes, where runoff happens, and how urban development interacts with this powerful force of nature. The OpenStreetMap water layer, however, presents a challenge when routing with PostGIS and pgRouting: Polygons.

Why are polygons a challenge? A routing network using pgRouting is built from lines (edges). Now, to state the obvious: polygons are not lines.

Real world waterway networks are made up of both lines and polygons. Rivers, streams, and drainage routes are predominately (but not exclusively!) mapped using lines. These lines feed into and out of ponds, lakes, and reservoirs. The following animation shows how much impact the water polygons can have on a waterway network... some very important paths simply disappear when they are excluded.

This post is a big one thanks to the query examples and screenshots involved.

This post was inspired by a two-part post written by Bruce Rindahl. The posts, titled "Flow path through a lake along the medial axis," are currently unavailable due to a blog upgrade issue. The original source URL will hopefully be restored in the future: http://berrie.ddns.net/?p=28.

This post uses the ST_ApproximateMedialAxis() function which requires the postgis_sfcgal extension. Create the extension, along with postgis and pgrouting so they are available as they are needed.

The data source for this post is OpenStreetMap data for Colorado loaded using PgOSM Flex's Docker procedures. Loading Colorado with the default layerset typically takes less than 10 minutes to get the .sql, which I load into my Postgres instance of choice. Be sure to use PgOSM Flex 0.6.0 or newer. Older versions of PgOSM Flex did not include water relations such as Standley Lake.

My book Mastering PostGIS and OpenStreetMap provides in-depth explanations covering how to load OpenStreetMap data (chapter 8) and prepare it for routing (chapters 14 - 16 and 18). The free preview section shows the book's full table of contents.

The largest body of water that disappears in the above animation is Standley Lake, also know as relation 3023193. The PostGIS function ST_ApproximateMedialAxis() can be used to generate a reasonable path of travel for many polygons. Another option is ST_StraightSkeleton(); that function is not discussed in this post. The following query and image shows how to calculate the medial axis for Standley Lake. 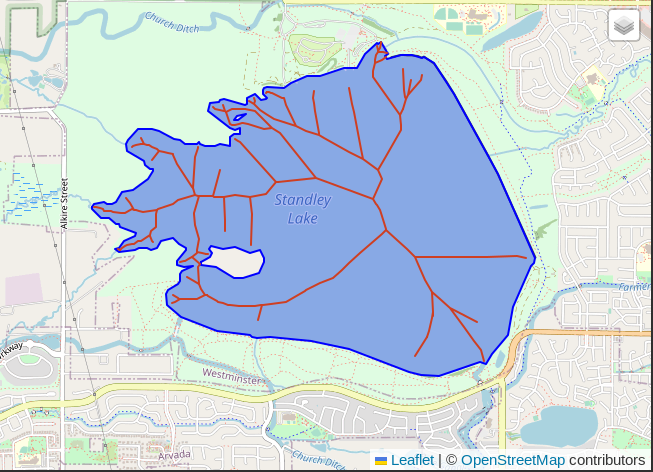 Routing has steps that can take a long time on large data sets. For the purpose of this post I limit the full Colorado data down to a roughly 5 kilometer area of focus are Standley Lake. I create a schema named routing_demo to hold our data and a table (routing_demo.focus) to store the geometry of focus. The focus area is used in multiple queries throughout this post to limit the amount of data being used.

The newly created routing_demo.focus table contains the data needed to establish the focus area. The lake polygon and calculated buffer are shown in the following screenshot. 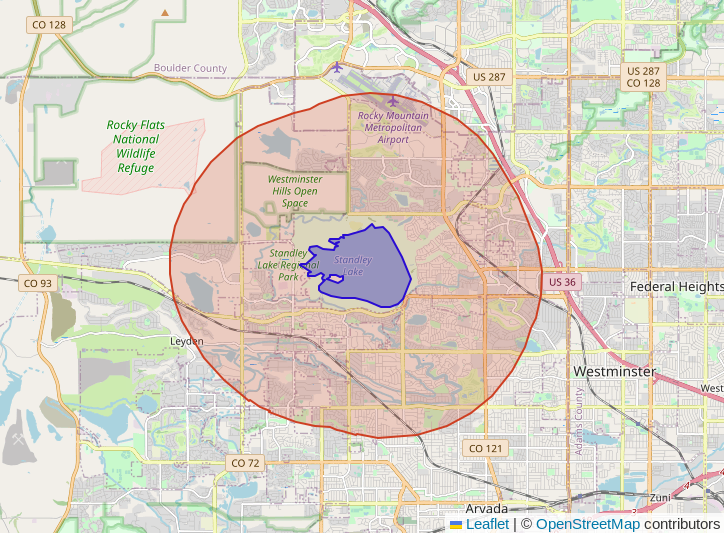 The next step I take is to check the osm.water_polygon data joined to the routing_demo.focus table. The following query shows that there are two types of water polygons I will want to exclude from the following steps: dam and boatyard. While dams have a significant impact to the flow of water, they are not part of the routing analysis I want to achieve.

With the focus area defined, the next step is to calculate and persist the medial axis lines for these polygons. The following query creates the routing_demo.polygon_medial_axis table with the individual lines that make up the medial axis for each polygon. The ST_ApproximateMedialAxis() function returns MULTILINESTRINGs, so ST_Dump() is also used in order to extract the individual line components for each polygon.

The input of 210 polygons created 4,415 medial axis lines, an average of 21 lines per polygon.

The following query and screenshot provide a look at the medial axis data saved to the routing_demo.polygon_medial_axis table.

The above steps have provided basic line routes through our water polygons. The medial axis lines, however, do not match up to where waterways enter and exit the polygons. To solve that challenge, we need to identify where the water lines from osm.water_line intersect with the water polygon layer. To accomplish this I'm reusing a trick from my post on finding missing crossing tags in OpenStreetMap data. 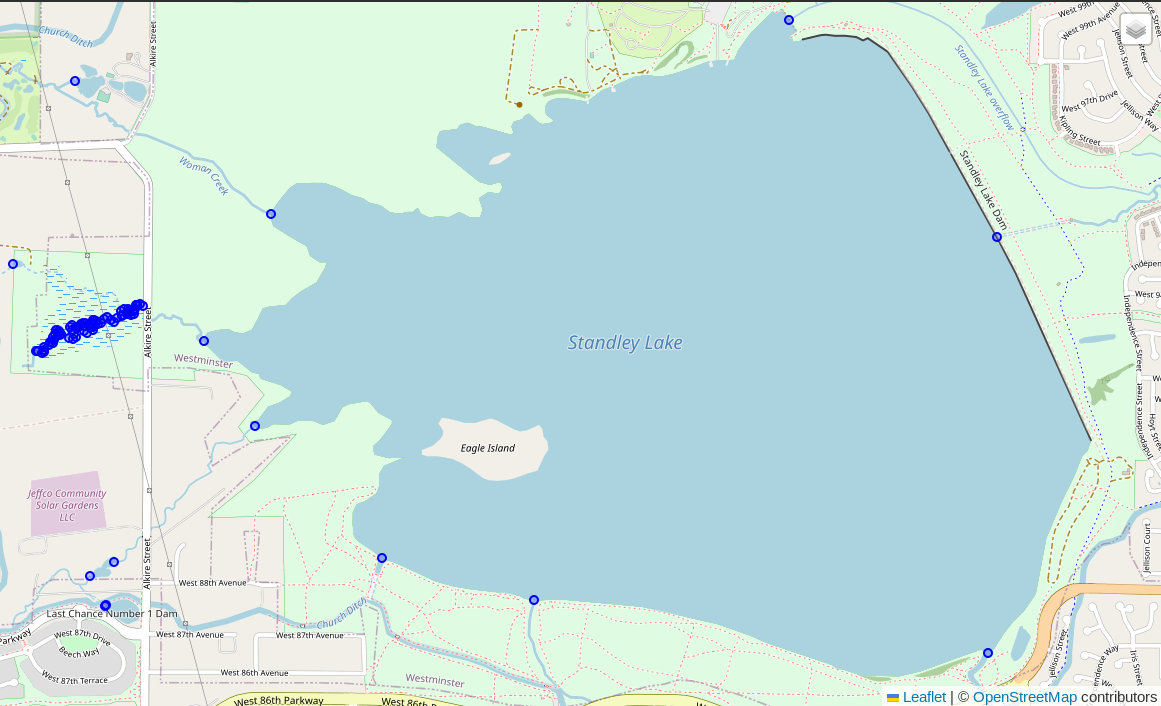 In case you were curious, the points that are contained within polygons are where the waterway line has been extended into (or through) the polygon itself. The wetland area to the west of Standley Lake is an example of that. The query above could be easily modified to exclude these points if the user desired that change. I have decided to leave them in, they won't hurt anything beyond taking up a bit more space.

To see the progress made so far I pull the data from the routing_demo.polygon_medial_axis and routing_demo.line_polygon_intersection tables into QGIS. The following screenshot shows the blue point where a water line intersects with the Standley Lake polygon. The medial axis has a branch that comes close to, but does not touch, the intersection at the boundary of the polygon. To create complete routes, we need to connect the pieces. 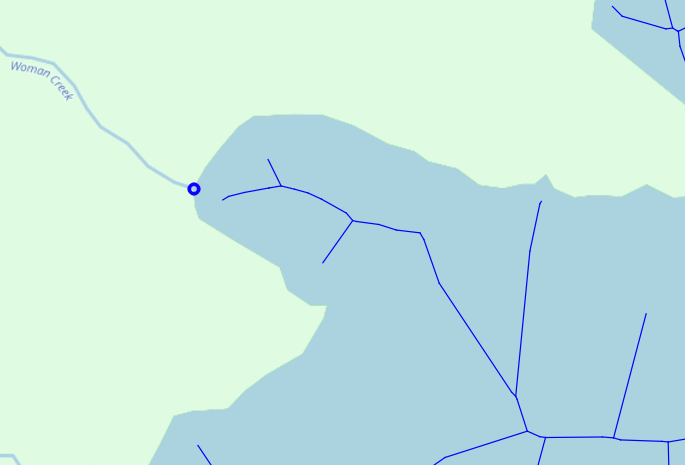 The following query uses ST_ClosesPoint() and ST_MakeLine() to bridge the point where a waterway intersects a polygon and the medial axis line(s) inside the polygon. The subquery in the INNER JOIN uses ST_Collect() to collapse the individual lines of the medial axis into a single geometry per polygon. Skipping this step would result in lines calculated to the closest point of each line. 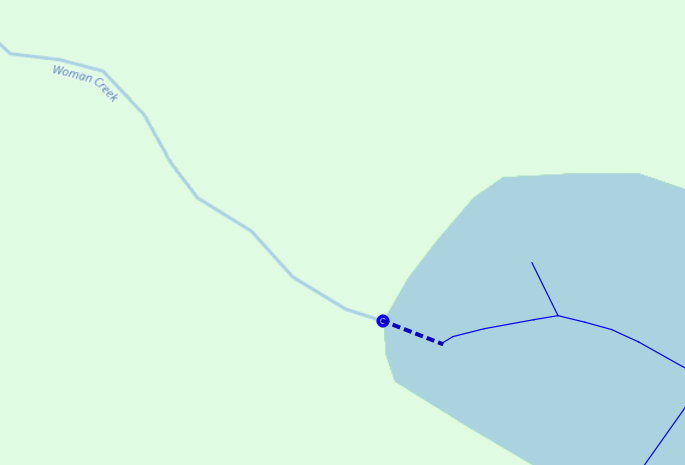 The steps above created the components we need to stitch together. Revisiting the list of items from the beginning of the post, the following table shows where the data elements are currently located.

The following query combines these three (3) data sets into a single table of lines. The goal in this step is to make everything ready for the pgRouting steps.

The following steps create the structures and data needed for routing. There is not room in this post to go into these steps in depth.
Chapters 14, 15, 16 and 18 of my book Mastering PostGIS and OpenStreetMap are all about pgRouting and explain this process in detail.

Create route through a lake

Phew, we made it. It's time to create a route! The following query creates a route from a chosen start and end node that goes through Standley Lake from west to east.

The start and end nodes that I used in this post (235 and 5930) will almost certainly be different for you. Any changes to the data or exact steps above will result in different IDs for the same point from the data.

This overstuffed post gave an in-depth guide to using OpenStreetMap data to create a waterway routing network capable of traversing polygons. While ST_ApproximateMedialAxis() was a key function involved, this post shows the use of more than a dozen functions! This technique sets the stage for more complete and complex hydrology analysis using this layer.

Beyond the waterway layer, this approach can be used to improve routing using other layers of data available in OpenStreetMap. Pedestrian routes are another place where polygons need to be included. To close this post, one more query and one more screenshot. Kudos for hanging in there! 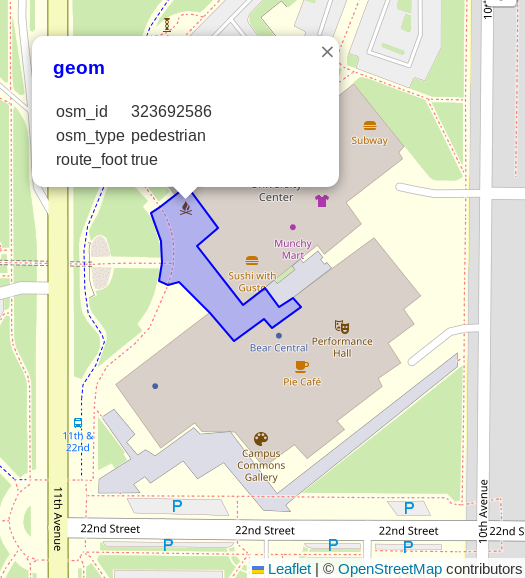