PostGIS rocks, and OpenStreetMap is Maptastic! One challenge I've had with this open source pair, though, has been getting a good, comprehensive set of OSM data into Postgres, on non-enterprise hardware. A few years ago I found Geofabrik's download server... a lifesaver! They offer logical regional exports of OpenStreetMap data, updated daily, distributed by a number of regional levels. The one I use the most is the U.S. state-level files, namely Colorado.

Once I had found this stellar data set (updated daily!) I wanted a way to easily get my own spatial database regularly updated with Colorado. One of the commonly mentioned tools is osm2pgsql. The problem is, I was (and still am) trying to run processes on the smallest hardware possible and this process is not exactly lightweight!

The release of PostgreSQL 12 and osm2pgsql v1.0+ has made this post obsolete. Please read our updated post for the latest and greatest details. If you are using older versions, the following instructions should still work, but are not maintained!

This post documents what has worked for me, including timings for baseline planning.

My test machine for this is a virtual machine (VirtualBox). The host machine has a quad-core Intel at 3.6Ghz, 32 GB RAM and a 7200 RPM HDD. The VM was given four (4) of the host's 8 threads, 8 GB of RAM, and a 100 GB dynamically allocated VHD. Both host and guest machines are running Ubuntu 18.04 Bionic Beaver, the host is the desktop version while the guest is the server version.

While this machine was given more power than I typically use for this, I did so because I wanted to test a variety of settings for osm2pgsql, and making things run even slower (with less power) would have greatly increased the time it took to write this post.

PostgreSQL 11.1 and PostGIS 2.5 were used for testing.

The Postgres instance we are loading data into is for temporary purposes only. Once the OSM data is loaded, it can (should) be further filtered and/or transformed before being dumped (pg_dump or other) for quick and easy restoration into your other dev and production PostgreSQL instances.

I recommend loading data from OSM's PBF format into PostGIS in a dedicated, temporary PostgreSQL instance. This instance should not share disks with any production systems! Postgres and osm2pgsql both use a lot of disk (I/O) during this process!

The PostgreSQL instance should be configured differently than a typical, production PostgreSQL server. The changes I make to postgresql.conf are intended to improve performance by reducing disk I/O. These changes reduce WAL activity, disabling replication, increasing checkpoint timeout, and disables autovacuum.

Warning: Setting autovacuum=off is a bad idea on most systems! Do not do this on production instances!

WARNING: These settings are for NOT ideal for most production Postgres servers!

The VM I am using has 8GB RAM, so I could set shared_buffers higher if we were just worried about the database, but we have to give room for osm2pgsql to run too.

Don't forget to restart PostgreSQL after changing these settings.

With Postgres configured, we need a database to load the downloaded OSM data into. First, switch to the postgres user for the remainder of the commands.

The PostGIS extension is required, the hstore option is recommended.

Using the .osm.pbf (see the OSM Wiki for more on the file format) extracts made available from Geofabrik's download server. For my testing I used the state of Colorado file downloaded on 12/29/2018. The osm.pbf file was 165 MB. Once loaded to PostGIS with spatial (GIST) indexes, it will take nearly 2.5 GB of disk space!

This file should be downloaded on the machine running PostgreSQL, that will also run osm2pgsql. The following commands will create a tmp directory in your home directory and download the latest Colorado OSM file.

With the OSM data downloaded, the last step is to get a style used for the import. I've always used the one available from gravitystorm. These commands clone the repo under a ~/git/ directory.

The path used above is needed for the --style flag in the following osm2pgsql command. The following command is suited for machines down to a single core and 1GB RAM.

The osm2pgsql command has a few parameters to tweak for performance. The first is the filename you want to load, change as needed, e.g. ~/tmp/colorado-latest.osm.pbf. The other two parameters are to limit for your system, and balance the main bottleneck we have to work around: disk I/O. The exact parameters that work best for you will depend on your system.

--cache 200 sets the process to cache 200MB. This is independent of RAM that PostgreSQL will use.

--number-processes 1 sets osm2pgsql to only use one process for loading. If you have multiple processors you can increase this value but effects are limited mostly by available RAM and I/O speed.

Add --unlogged flag. This makes osm2pgsql use PostgreSQL's unlogged table option. This nifty feature is perfectly suited for temporary processes! It bypasses writing data the WAL saving all that I/O. I/O is the bottleneck of this process, so every step to reduce I/O is helpful.

Remember, I've already warned you this should be a test server. When using unlogged tables, you need to make sure you take steps to backup your data; unlogged tables are not crash safe.

A note on flat nodes

I've seen examples showing the use of --flat-nodes. Flat nodes should not be used unless you are loading a full planet, or Europe. If you're loading a smaller file than Europe (e.g. < 15GB), it will (probably) do bad things and slow you down. Plenty of places give examples with this command, but don't use it.

To help give an idea of how long this process can take, I ran osm2pgsql with 9 combinations of settings controlling RAM and CPU utilization. RAM was set to 200, 2000, and 5000 MB; processes was set to 1, 2 and 4. Each configuration was ran twice, with the average of the two runs being presented.

These timings do not use the --unlogged flag, that option should reduce load times even further. 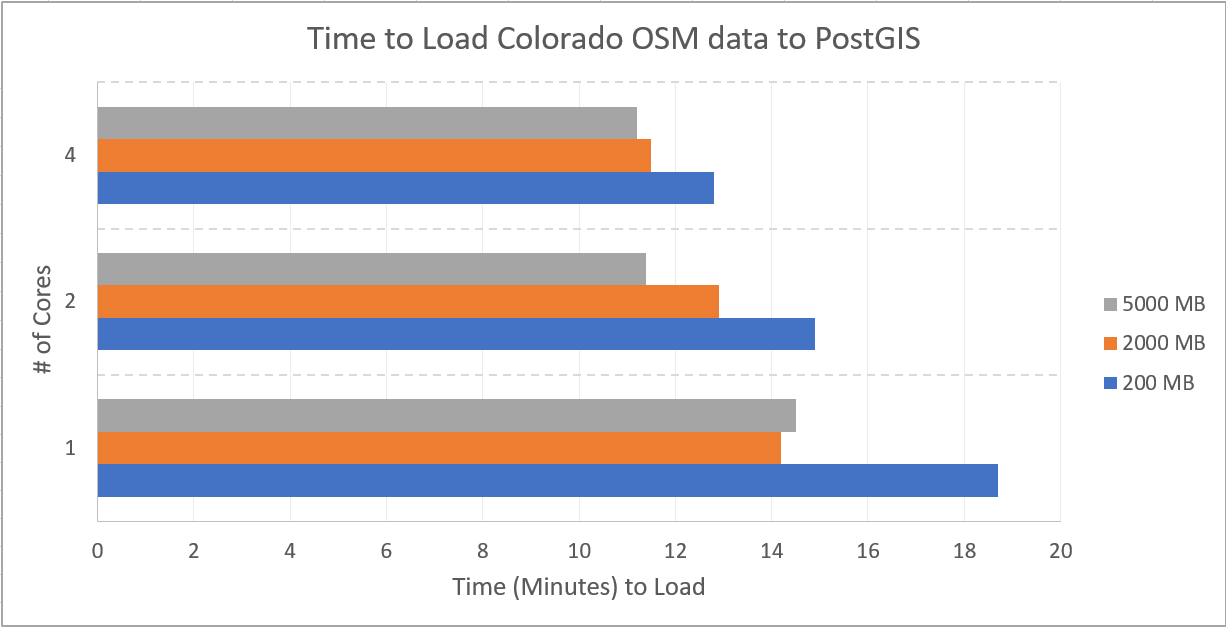 The OSM data is now loaded to Postgres in three (3) main tables named with the prefix planet_osm_. The last portion of each table name describes the type of data it includes, point, line, and polygon. The following query shows the row counts in each of the tables now storing Colorado's OSM data.

The data is loaded, yet the format of stuffing all the data based solely on geometry type (line/point/polygon) leaves quite a bit to be desired. To illustrate why, imagine a single database table that stored products, sales, and employee data all in a single table together. They all have numeric data so why not? The products have prices, sales contain an aggregate of product prices, and employees have a salary or wage... all numeric!

That idea probably seems silly right away because the data is all very different, but that's exactly what an OSM table that includes all of one type of geometry does. The table public.planet_osm_point includes stop signs, business locations, trees, and mountain peaks just because they're all points. Yes, but, they quite different representations of data.

My next post, Transform OpenStreetMap data in PostGIS covers more about the structure of these three tables and how to transform them into a set of more usable tables via PgOSM.

My main resources for learning and experimenting through this were these sites below. Unfortunately, most are out of date, include broken links, and missing information.