Use BIGINT in Postgres

This post examines a common database design decision involving the choice of using BIGINT versus INT data types. You may already know that the BIGINT data type uses twice the storage on disk (8 bytes per value) compared to the INT data type (4 bytes per value). Knowing this, a common decision is to use INT wherever possible, only resorting to using BIGINT when it was obvious* that the column will be storing values greater than 2.147 Billion (the max of INT).

That's what I did too, until 2-3 years ago! I started changing my default mindset to using BIGINT over INT, reversing my long-held habit. This post explains why I default to using BIGINT and examine the performance impacts of the decision.

As I conclude at the end:

The tests I ran here show that a production-scale database with properly sized hardware can handle that slight overhead with no problem.

Why default to BIGINT?

The main reason to default to BIGINT is to avoid INT to BIGINT migrations. The need to do an INT to BIGINT migration comes up at the least opportune time and the task is time consuming. This type of migration typically involves at least one column used as a PRIMARY KEY and that is often used elsewhere as a FOREIGN KEY on other table(s) that must also be migrated.

In the spirit of defensive database design, BIGINT is the safest choice. Remember the *obvious part mentioned above? Planning and estimating is a difficult topic and people (myself included) get it wrong all the time! Yes, there is overhead for using BIGINT, but I believe the overhead associated with the extra 4 bytes is trivial for the majority of production databases.

If you have a production database in 2021 I will assume:

I performed additional testing using a server with half the power and another with twice the power. The data scale was adjusted accordingly and similar results were observed in each set of tests.

I created two databases, one for INT and one for BIGINT. The names of the databases help track which results went with which test, and database names show up in the commands via htop and iotop.

Setup the pgbench structure with --scale=100 in the testint database. Using 100 for the scale results in 10 million rows in the largest table (pgbench_accounts).

14 seconds, not too shabby. The pgbench tables use int4 so this database is ready for testing performance of the INT data type.

Now use pgbench to prepare the testbigint database with the same scale.

The testbigint needs to have the INT columns converted to BIGINT for testing. I used the dd.columns view from the PgDD extension to build the queries needed to alter all int4 (INT) columns to the int8 (BIGINT) data type.

The above query returns the following ALTER TABLE commands.

The ALTER TABLE queries were saved into a .sql file to make it easy to run with an overall timing.

The ALTER TABLE queries took 1 minute 8 seconds. This means it took 54 seconds longer to change the data type than it took to create the entire database from pgbench to begin with!

The biggest table here only has 10 million rows. The wait times get longer as the data grows toward 2 billion rows!

At this point I did a VACUUM ANALYZE against both databases and rebooted the instance.

I picked an account number (aid) and tested this query against both databases.

The important part of the output was the timing (in ms), shown in the following table. Re-running the query on either database returns results in the 0.040 - 0.100 ms range with no clear winner between the two. The query plans (not shown) were identical including estimated costs.

The following query is a more complex query to hopefully highlight the differences a bit more. The filter (WHERE bid = 1) uses a sequence scan on one INT/BIGINT column while applying multiple aggregates to the abalance column, another INT/BIGINT columns. This query shows a slight performance edge for INT over BIGINT in the range of 2% to 3%. While there is a minor difference in performance, the timing difference is less than 20 ms, hardly a major concern for a query that takes half a second.

A quick tangent on indexes. The pgbench init scripts do not index the pgbench_accounts.bid column. The above query that filtered on bid and aggregated the balances illustrates that a proper indexing strategy will have a far larger impact on performance then the choice of INT or BIGINT data types!

Taking a look at the aggregate query in pgMustard's query plan tool highlights the missing index. The plan from the BIGINT query reports a sequence scan taking 460 ms (on 3 threads even!), 92% of the entire execution time of 500 ms! pgMustard correctly suggests adding an index to the bid column with a 5 star rating for the suggestion. 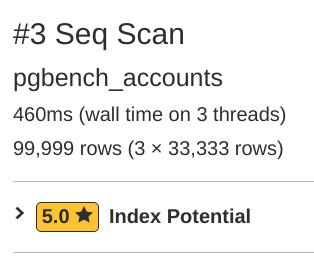 I added the index.

The query on BIGINT now runs in only 35 ms by using the index! Here's the plan on pgMustard. With a proper index in place the performance difference between INT and BIGINT becomes trivial.

The above tests took a look at performance at the individual query level. This section uses pgbench to put the database under a heavier load of queries.

The first pgbench command used against each database is intended to put the server under pressure but not push it to the breaking point. It uses the --select-only option to skip the insert/update queries.

This 10 minute test (-T 600 is in seconds) against the testint database ran 25.0 M transactions with a latency average of 0.113 ms. The latency average reported by pgbench is the time it took to execute the query and return results.

Against the testbigint database, pgbench processed 25.3 M transactions! That means the BIGINT test ran slightly faster, not slower! 🤔 The latency average was 0.112 ms.

I re-ran these tests a few times (like I do for all tests) and achieved consistent results. My hunch is that this unexpected result is a side effect of my quick test methods.

The following pgbench commands bump the connection count up from 5 up to 20. The first command uses the default pgbench tests that include a mix of read/write queries. The second uses the --select-only used above.

The load simulated in this section is too high to expect a server of this size to gracefully handle. It is interesting that it takes your server being under serious stress in order to see a noticeable drop in performance from using BIGINT instead of INT.

While the read/write test was running against the testint database I took the following screenshot from htop. The screenshot was taken at the 5-minute mark of the 10-minute test and shows that this server is struggling to keep up with the queries. If your database server is working this hard, you should be working on a plan to up-size your hardware!

There are still valid reasons to prefer avoiding BIGINT unless absolutely necessary. Do not take this generalized advice as a reason to list very specific, non-standard use cases that benefits from the lowest possible overhead. You're preaching to the choir... I know! I love running Postgres on a Raspberry Pi and have embraced the occasional headache that comes up from time to time.

Here's an incomplete list of some cases where using INT over BIGINT might still be a good default.

I list stubbornness in all seriousness. After all, my posts from 2014 on using a seriously undersized server to host Jira are still visited on a regular basis! These were my most popular posts up until about 2018 or so. (Weird, right?) I had stubbornly gotten Jira to work, spent a massive amount of time fighting it, and I gained a ton of experience you can only learn the hard way. As I wrote, my stubbornness has caused me pain:

The popularity of those posts makes it seem like I'm not the only one... Maybe you want to set yourself up for an unexpected INT to BIGINT migration.

This post covered why I will continue using BIGINT as the default over INT. Ultimately, I'm choosing to adopt a slight overhead across the board in order to avoid having to repeatedly go through INT to BIGINT migrations. The tests I ran here show that a production-scale database with properly sized hardware can handle that slight overhead with no problem. Only when the server becomes severely loaded do those slight differences in overhead translate into noticeably slower query times or throughput.