This post is an attempt to document the South Table Mountain fire in Golden, Colorado. The fire started shortly before 4:00 PM on Thursday, 3/9/2017. It was fully contained by Saturday, 3/11. I have spent considerable time hiking on this particular mountain and have surveyed and updated a significant portion of those trails within OpenStreetMap.org (OSM). In fact, I was just up there a couple weeks prior to the fire starting to update OSM to include the most recent changes that Jefferson County Open Space had made to the trails.

Before I go any further, I want to give a huge shout-out to all the crews that responded to this fire and effectively controlled the burn area. 9News.com reported close to 70 firefighters from 25 organizations came together to battle this blaze. I'll call out @WestMetroFire because that's the main one I had seen posted, but I know they're far from the only ones out there. There was news that one firefighter was injured while fighting this blaze. I hope that their injuries were minor and they're doing well!

As Golden residents, my family thanks you for your service and dedication!

Whenever I see news of a fire, I am always curious about the area that burned, what is around it, and how it is affected over time. This time, with it so close to home, I decided to take a swing at documenting and visualizing it myself!

This next part shows the initial estimates I made based on the available imagery from 9News.com's coverage and my local knowledge of South Table Mountain. The following part shows updated estimates based on the limited surveying I was able to do up on the Mesa itself and driving by the north side that are rocky slopes.

The main brewery (Coors) is due west of the burn area, while their trans-loading operation is just to the north. The fire jumped up to the top of the mesa at one point on Thursday (3/9); firefighters managed to keep it from continuing on that path. That area was the furthest the fire made it to the south-east. There are dense residential areas both to the south and the east of where it leaped to the top. Due east of that area is the Rolling Hills Country Club.

Our initial estimate of the burn area works out to be just over 64 acres. The last official estimate I heard on the news was that the fire burned 66 acres. That puts this estimated area fairly close to the total expected scar. 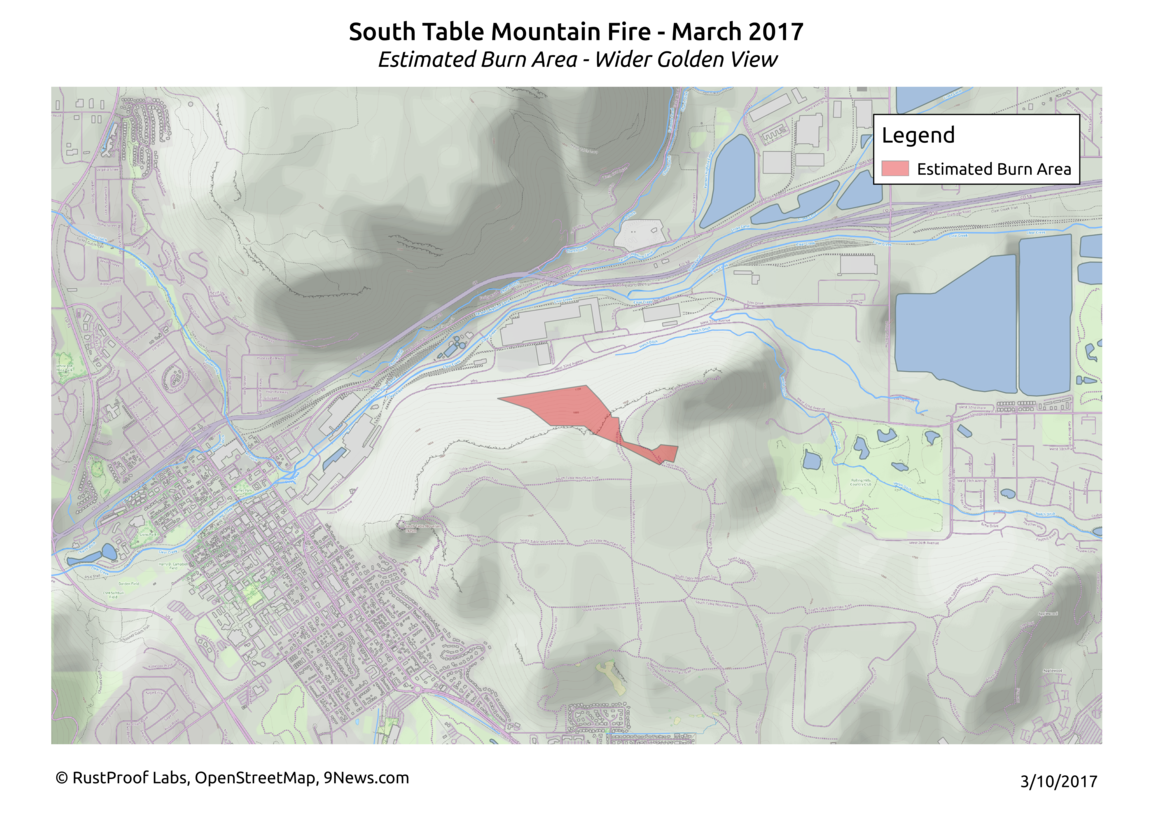 The terrain on the north side of South Table Mountain is difficult, to say the least. According to the contour lines, going from West 32nd Avenue up to the top of the mesa is roughly a 1,000 meter climb (3,200 feet). To contrast this, the hiking trails heading up on the south side of the mountain see a mere 40 meters (131 feet) of incline to reach the flat-top. This climb combined with the rocky terrain (oh yeah, and flames!) must have made fighting this fire extremely challenging.

Reportedly, there were 2,000 Xcel customers that lost power due to a pole burning in the fire. Based on this knowledge and the pictures from 9News, I originally suspected that the point marked in the next image was close to where that could have occurred.

It seems that the fire crews did an amazing job keeping the fire away from this part of our critical infrastructure. 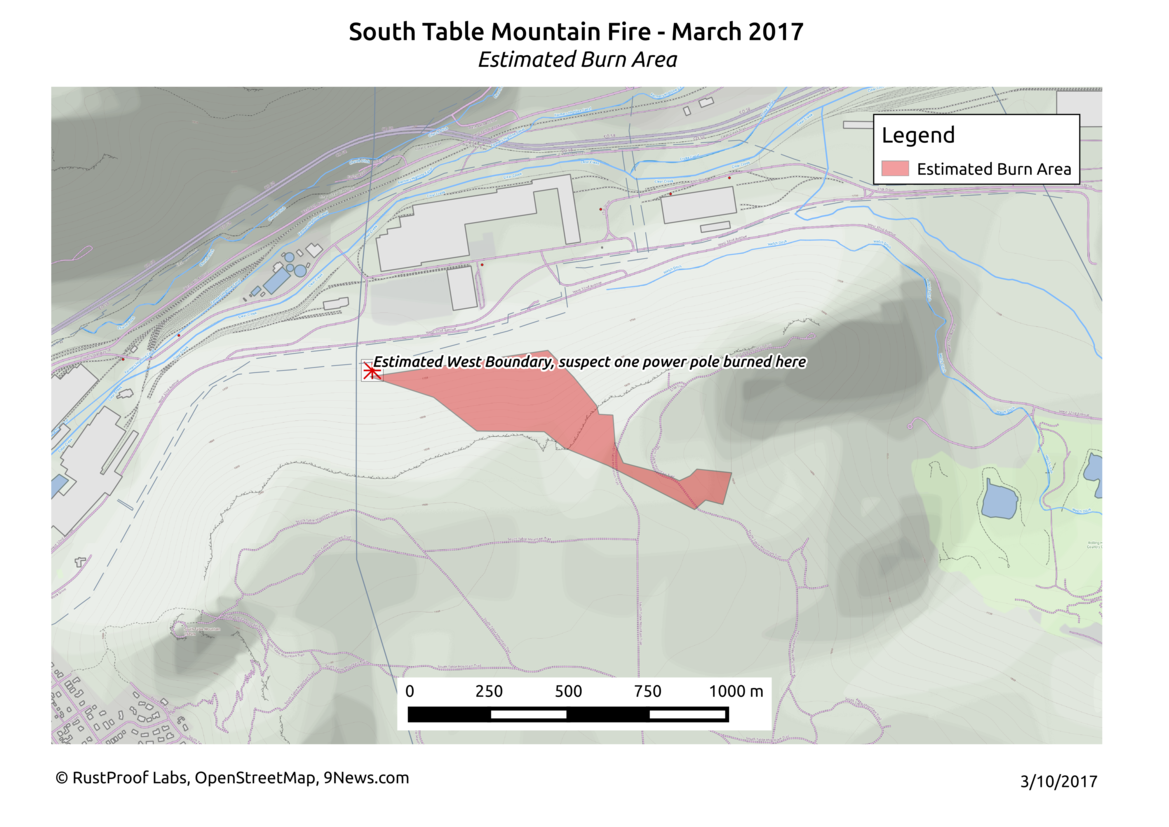 South Table Mountain was open for hiking again by Sunday, 3/12/2017. That morning I got up and hiked the trails to the area I thought had burned. My estimates from the imagry were fairly close for the parts on the mesa, but the affected area on the cliffs and slopes below was off quite a bit. I have now hiked up there twice since the fire, and am looking forward to a third trip with all this wonderful moisture (rain and snow!) we just got. Below is my updated estimation of the area that burned. The estimated burn area is up to roughly 84 arces. 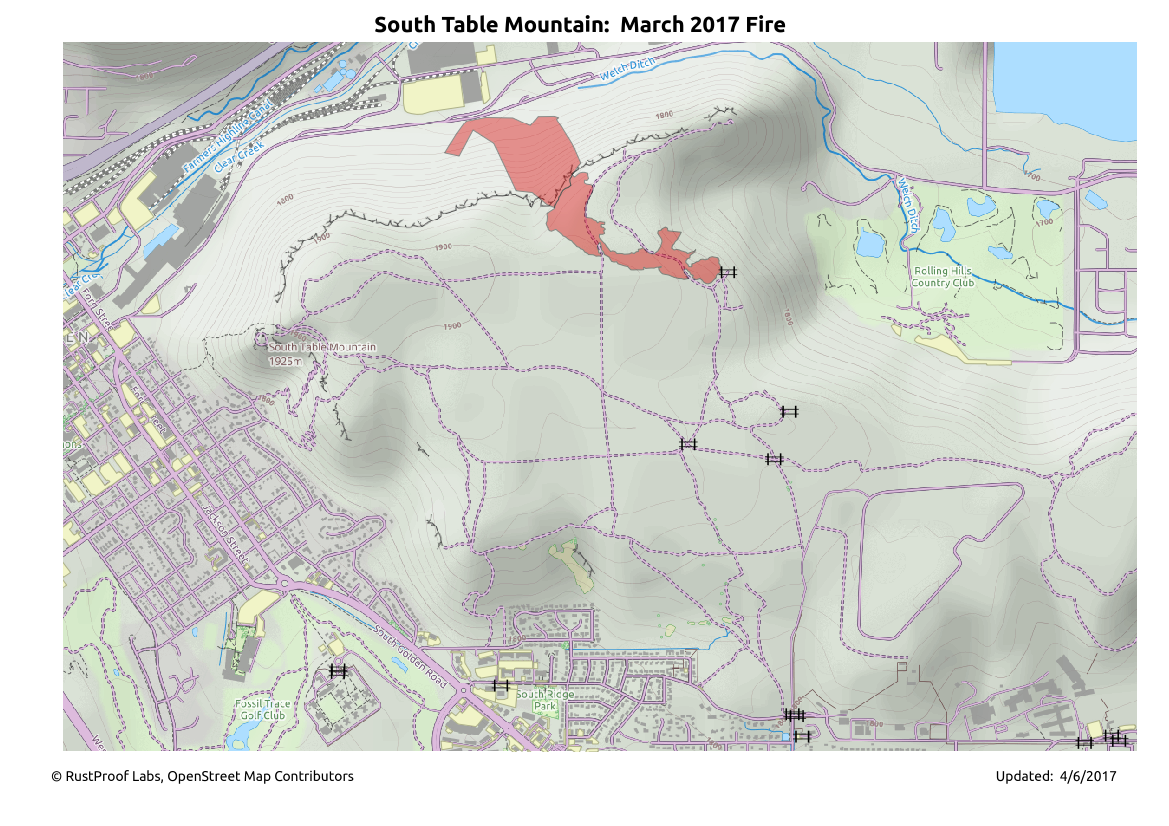 Some of the areas that are marked as burned here are on the fringes and likely won't see any long term impact. In fact, when I hiked up there again on 3/27, just two weeks later, it was amazing to see how much green was coming through already.

This first picture shows the area up on the mesa top where the fire seemed to do the most damage. One of the hiking trails runs along the 4 grooves in the picture. I assume these were the fire lines the firefighters dug. From what I saw, it seemed to be effective. 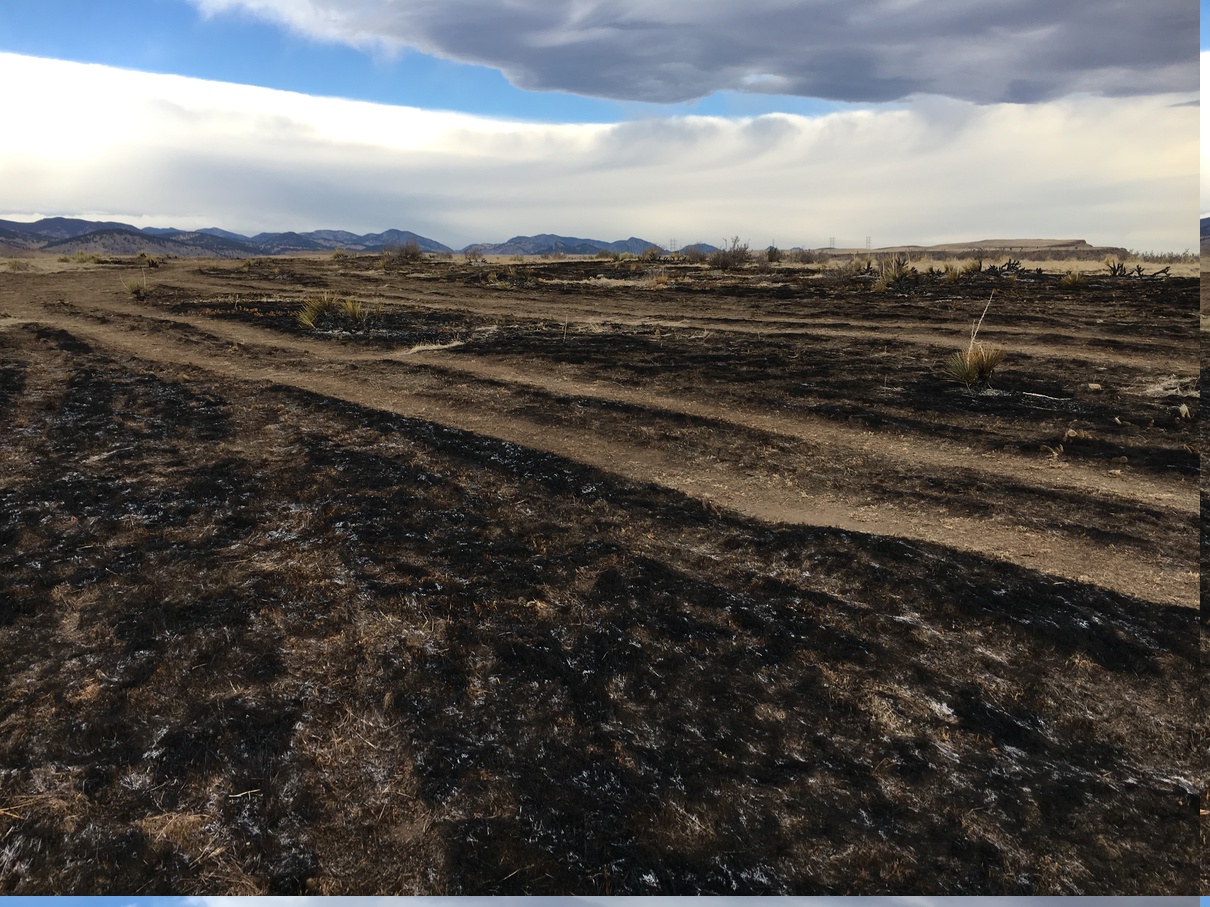 The first morning I hiked up there, I was wondering what the aftermath of a fire like this would smell like. When I got up there and was downwind, it smelled like a rancid camp fire.

This next three pictures are from a second hike on 3/27/2017, just two weeks and a small amount of moisture after the fire. This next photo is from a different perspective and location than the previous one, but it's the same general area. The amount of green was overwhelming! 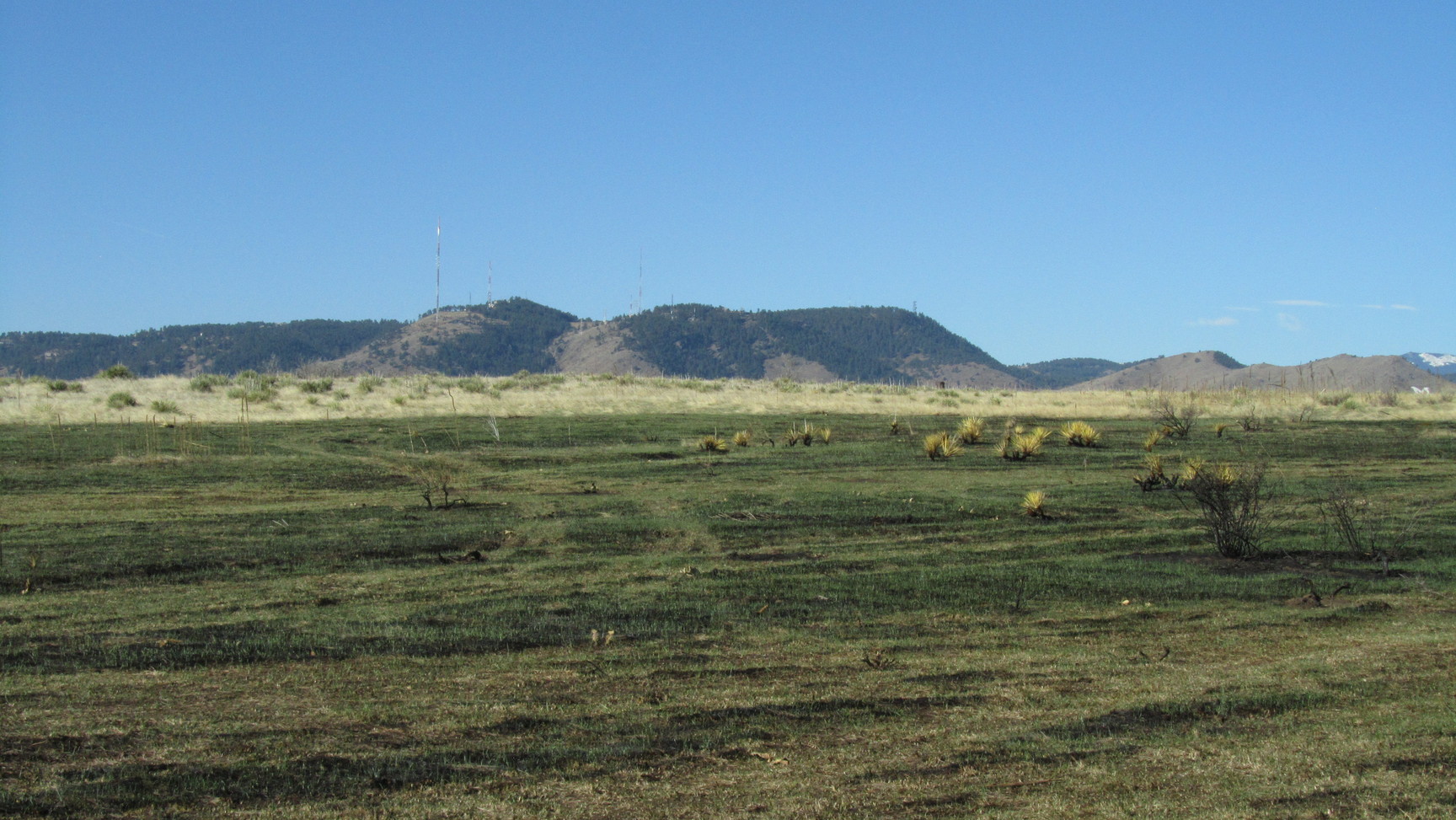 Some of the yucca plants had lots of apparent burning around their base, yet their tops still seem relatively healthy.

Here's a wider view of the yucca plants along this area. 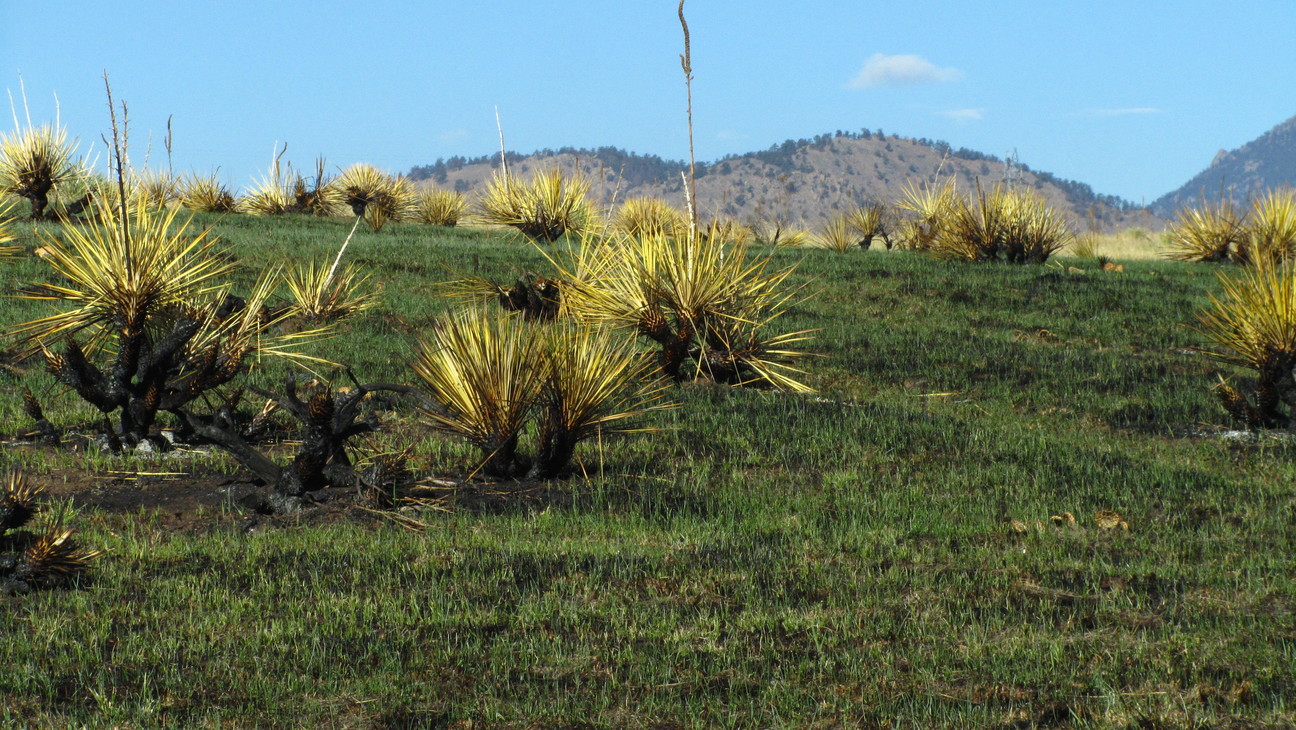 While a fire just over one mile from your house is scary, fire is a natural part of the lifecycle of natural areas. I'm excited to track the progress of regrowth of this area over the coming year. I plan to update this post at least one more time to document the recovery of the area.